I wholeheartedly decided that I would convert my existing Ikea Expedit sitting desk and bookshelf combo to a “hipster developer” standing desk. Part of the decision was because of my buddy Mike. He was telling me about how using a standing desk had dramatically improved his posture and in the 12 months since he was forced (by his employer) to use a conventional desk, he gained like 20lbs.

The more personal reason to switch was because I just hate sitting all fucking day. By the end of the day I’m antsy because I was sedentary for the better part of the day. As my mother would say, “sit down you’re making me nervous”. For me, it’s like when a wild animal is caged up, and they pace. It’s mentally unnerving for me.

With my recent switch in jobs (current status: to the moon with AppSumo / SumoMe!), I am back to working remote. I no longer have my lonely office so I’m primarily working from home with the occasional co-working experience to keep things interesting. If I were to continue to use a convention desk I would legimitely be seeing nearly the entire day. Wake up, do my morning routine, sit on my ass. Get up, grab lunch, sit. Get up, sit for dinner, get back to working or playing video games or watching television… while sitting.

It’s too easy to fall into that routine and since I’m not a huge fan of the gym that is most likely the routine I would fall into. My other buddy Dean made one hell of an argument for getting to the gym instead of trying to cut corners but it’s more than just that. I really wanted to switch things up and give myself a new perspective and hopefully find some inspiration. It worked for Hemingway, so why the hell not?

So enough of that introspective drivel, let’s talk about how I converted my existing desk from Ikea to a standing desk. Before I start, it’s worth noting that the Expedit desk / bookcase that I already owned is discontinued. Not just that, the model that seemingly replaced it is of different dimensions. Instead of investing in a whole new desk, I decided to make this shit work.

My existing desk consisted of a bookshelf with 8 cubby holes, 4 tall by 2 wide. Attached to that at the middle shelf was a desk top with a single leg that was the same depth as the desk. I had been thinking about this for a while, that if I were to attach the desk top one shelf up, it would be the perfect height for a standing desk (for me) and would allow me to upgrade without having to buy a whole new desk.

To convert to a standing desk, I went ahead and picked up 2 adjustable height legs from Ikea. The Gerton leg was pretty much the only option as it was not only adjustable, but was the tallest leg that Ikea was selling. Mike, that I mentioned earlier has the same legs on a different desk. The legs themselves were 30$ a pop but since the desk strapped to the bookcase, I only needed 2 legs (60$) to make the conversion.

The legs are adjustable but I have them at their max height. Incidentally, the maximum height was the exact size that I needed the legs to be. I would have picked up fixed length legs if they were available, but they weren’t. The leg kits came with a mounting plate that has 5 screws and the leg itself screws into that. My desk didn’t have the pre-drilled holes so I went ahead and did some measurements and ended up drilling some holes and mounting the leg plates myself. Really wasn’t a whole hell of a lot to it.

The only other expense to convert my desk was an anti-fatigue mat. I went ahead and picked up this one on Mike’s recommendation. It’s been pretty comfy but I think I could have stood to get something a bit thicker just to help raise me up to an ideal height. Unfortunately, because the desk top is affixed to the bookcase, there’s no real wiggle room on height. Only way to make it work is to adjust my height.

Fortunately, for the most part, I am are a quite comfortable height and the only caveat is that the desk is a wee bit wobbly. I’m giving the wobble a few days before acting. The height of the legs definitely lend itself to being a small bit wobbly so it’s really just a question of whether or not the wobble will be a distraction. If so, I can easily strap the desk to the wall with a shelf bracket.

I know this wasn’t much of a “how to” due to the lack of photos, but I can at least provide the before and after for reference: 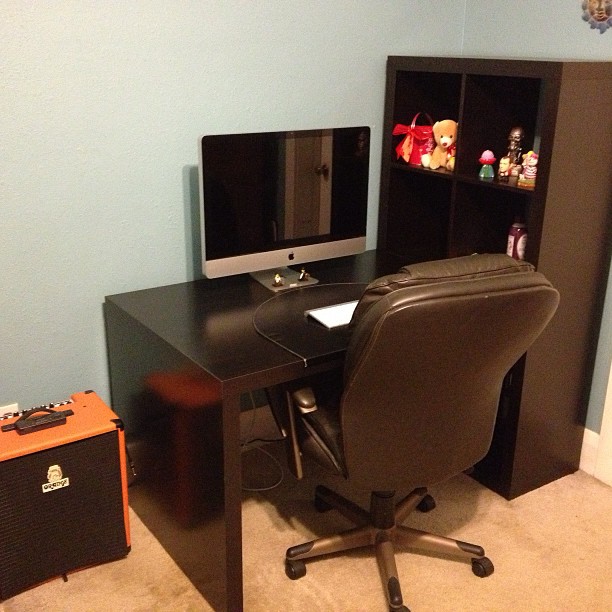 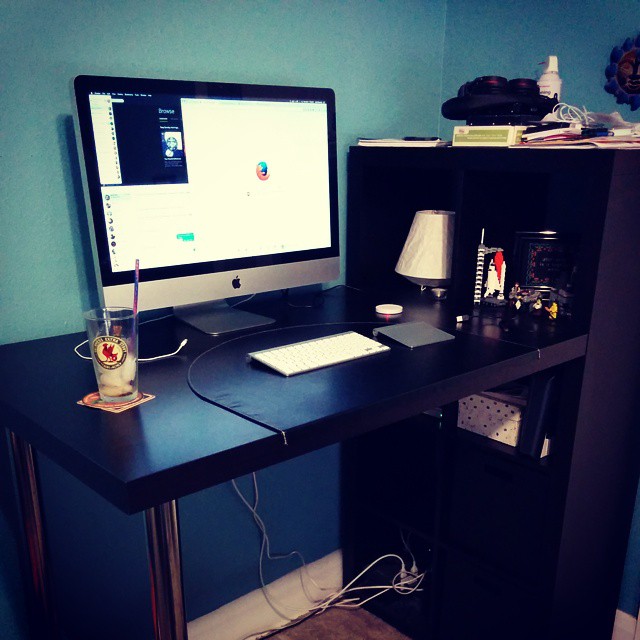 I’m pretty committed to the standing desk, but just in case, I do have a MacBook Air I can use and go crash on the couch or something during the transitional period while my body gets used to things. I’m hoping the new perspective will inspire me a bit and help me beat that antsy feeling I get after spending all day on my ass.

This is just one of a handful of changes I’m embracing in 2015. More to come on some of the other life hacks and alterations I’m working on :)