Fuck this, I’m going to Tumblr

After many years of maintaining my personal blog as a way to help aid in my own learning and to feel like a bad ass because of that proud feeling of building something with your hands (well fingers) I have migrated to Tumblr for the indefinite future.

You may remember last year when I migrated to WordPress and shortly thereafter migrated back, not the case this time. Initially I didn’t quite understand Tumblr, mainly because all the experience I had with it was seeing “blogs” that were nothing more than posted and re-posted animated GIFs and memes. This was further perpetuated by starting SceneKids.com and seeing kids talk about how “they blogged” and yet it was still just animated GIFs, memes and no substance (the written word being the substance I’m referring to). I figured with all the hype from the kids I’d go ahead and set up the SceneKids.com Blog on Tumblr mostly for posting about new features and helping give people a head’s up about downtime and system updates and all that.

This time spent actually using Tumblr made me realize that these kids and their stupid pictures were just a misrepresentation of the platform as a whole. I’ve come to realize that Tumblr is quite possibly one of the best blogging platforms available right now. Instead of trying to do too much (like Wordpress), Tumblr is focusing on content. I’m definitely under-utilizing all of post formats available (I did suggest a “source code” type to allow for easier posting of code snippets fingers crossed) but what I am using is magnificent (just text posts for the most part, not really big into “reblogging” either).

Gone are the days that I feel the need to maintain my own blogging platform (actually 2 blogging platforms are my wife’s site is running on an older version of the same codebase) as I have so many other projects going on. No longer will I feel like my blog could do more but not have the time to update it. No longer will I have to host my blog on my server since Tumblr easily and cost effectively (reads: free) allows you to use a custom domain.

Unlike my switch to WordPress last year, I’m confident I’ll be on Tumblr until they shut their doors (no pressure, seems like they already “made it”). Once I am completely migrated over I plan to migrate the wife’s site over as well. I had migrated all of my posts by hand (and moved my code snippets to gist.github.com) but plan to automate her migration (holy shit, 600+ posts?!) and as usual release the code assuming there’s not something out there already.

Usually my first post of the year is geared more towards talking about how I need to blog more, but this year I can confidently say that migrating to a better platform will encourage me to blog more.

AND I already got a snotty reblog of “Switching to Linux, you’re doing it wrong”… Tumblr has brought me an all new audience to piss off (c’mon the post is tagged #flamebait ;)

No migration is complete without a revamped UI, thought I’d post a capture of the old site before it fades away… 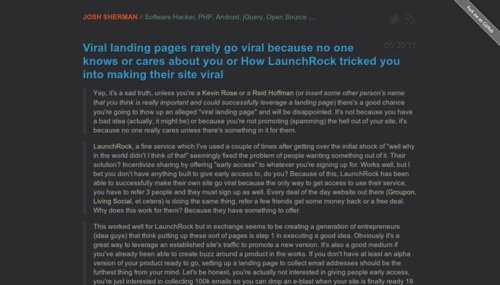 And let the record show, animated GIFs are too mainstream, APNG is what all the hipsters are using.

The Art of Deception: Controlling the Human Element of Security