Forcing yourself to use shell aliases

Fact: Shell aliases save you time.

Fact: Everybody wants to be more productive.

Fact: Retraining muscle memory can be a pain in the ass.

Then it hit me! Why not break vim so that I couldn’t run it directly, thus forcing me to use the alias! And that’s what I set out to do.

To start, I created a bin directory in my dotfiles, added a new file named vim and made it executable:

I then opened up the vim file and wrote the following:

The conditional checks to see if the script is being invoked directly or not. Without that I was running into issues with other scripts that would call vim and updating my $EDITOR didn’t seem to resolve anything.

After the script was in place, I made a few adjustments to some variables in my .zshrc file. First, I updated my v alias to use the full path for my vim executable instead of just vim:

And updated my $PATH to check the bin I created in my dot files:

With these changes made, I restarted my terminal and am now greeted by this whenever I try to run vim: 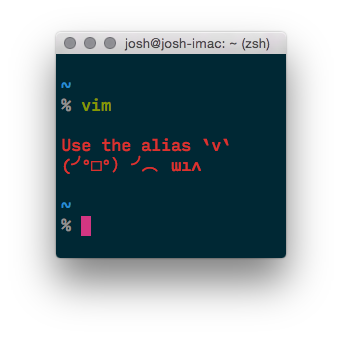 Extreme? Yeah it is, but it’s going to force me to adapt, which is a very good thing. I’ve spent the last week using that and have absolutely no regrets. I’m even planning to do the same thing with a handful of other aliases as well!

If you’re interested in seeing which commands you type often and where you would benefit from some aliases, check out HuffShell, a gem for suggesting new aliases based on your history.

Also, my dotfiles are available for perusing and poaching if you’re interested.