In the words of the Security Level setting for CloudFlare’s Firewall:

As it turns out, I’m not a stranger to having bots on my social network, Ginpop.com.

I’ve even documented my previous experience with a DDoS attack and how to mitigate a WordPress Pingback attack!

This particular attack was special though. It reminded me that the site is still kind of relevant if somebody went out of their way to script something to try to exploit it with their spam links.

The attack itself wasn’t very sophisticated in the least. New account was created, email was verified (by clicking the link in the message I sent them) and they would proceed to upload a photo of a hot chick, and update the bio to have a short CTA and a link to their lame landing page.

If I were going to express the bio text in RegEx it would look something like this:

Or something like that. I eventually realized that every one of the fucking profiles was using the same link.

That’s on me and made cleanup pretty easy. Just update the database to flag all the accounts with that URL in the bio for deletion.

While all of this was happening, I was attempting to block the IP addresses as new accounts were being created.

They weren’t being created too quickly but definitely was a losing battle on my end to try to do things manually.

In the past I had piped IP addresses out to ufw to deny them.

Since I don’t like to consider myself a one trick pony, I figured I may as well investigate a bit further and see if I could come up with something different.

I disabled new user registration at this point and started to interrogate the data that was being submitted to create the accounts.

Am I dealing with one of those more sophisticated spam shops there they are throwing bodies at the CAPTCHAs or did I miss an update or something from Google and my site had been laying vulnerable while I run around with egg on my face?

Upon further investigation on Google’s reCAPTCHA site, I was in fact using the latest version of reCAPTCHA. The only gotcha I noticed was that I didn’t have the security level maxed out under the advanced settings.

I’ve since updated the setting to be “most secure” but in typical Google fashion there wasn’t much context as to what that would actually do and if it could solve anything for me.

I had also flipped the site to “Under Attack” mode on CloudFlare just in case. This particular change has already started to be a burden to some of my more impatient users.

Even further digging around the reCAPTCHA site, I came across some request data that was most troubling. Seems that as of the last week or so there have been days where most users (90% last Saturday) were not being served a CAPTCHA at all: 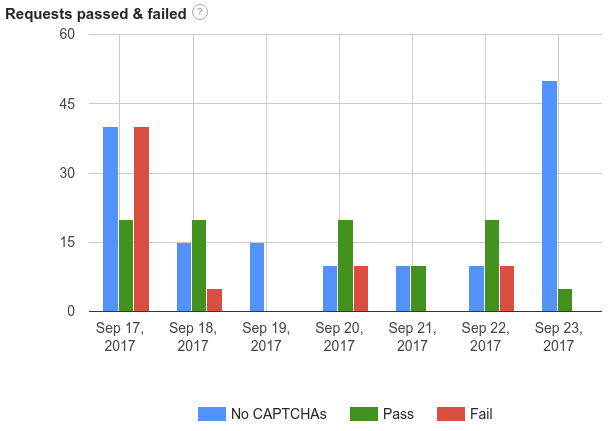 Would be nice if Google had an option to disable this “feature”. At least for my implementation, I want every single person to be served the CAPTCHA.

Since that’s not the case, I went ahead and implemented a couple of things to remedy the situation.

First, as it was the most obvious, I blocked any registrations from that particular user agent.

There may be some false positives being blocked from being able to register, but my thought was, anybody running Firefox is probably running on something a bit more recent than 45 which was released in 2016.

Also helps that most of my users are on Safari or Chrome.

The second piece of the puzzle was to implement my own janky CAPTCHA:

Straight out of the 90s, amirite?

If the value of the field is empty, the registration is rejected. Nothing too fancy and only took a minute to implement.

Best as I can tell, whatever piece of shit software these spammers are running isn’t going to be quickly adapted to this change.

Next steps are to continue monitoring which registrations are making it through and tweaking the formula as necessary.