For season 19 of Diablo III, the wife and I decided that we were not only going to play the season, but actually set out to complete all of the objectives for the season.

As we’re pretty much filthy casuals when it comes to Diablo, we did both accomplish what we set out to do, but not without a major setback that nearly cost us to season.

Seems recently something changed, either with macOS or Diablo III itself that cause my wife’s 15” MacBook Pro (last year’s model) to start with some pretty shitty behavior.

From any screens with items (inventory or chest) the moment she would click on an item the screen go nuts and made it fairly unusable. The screen would look as such: 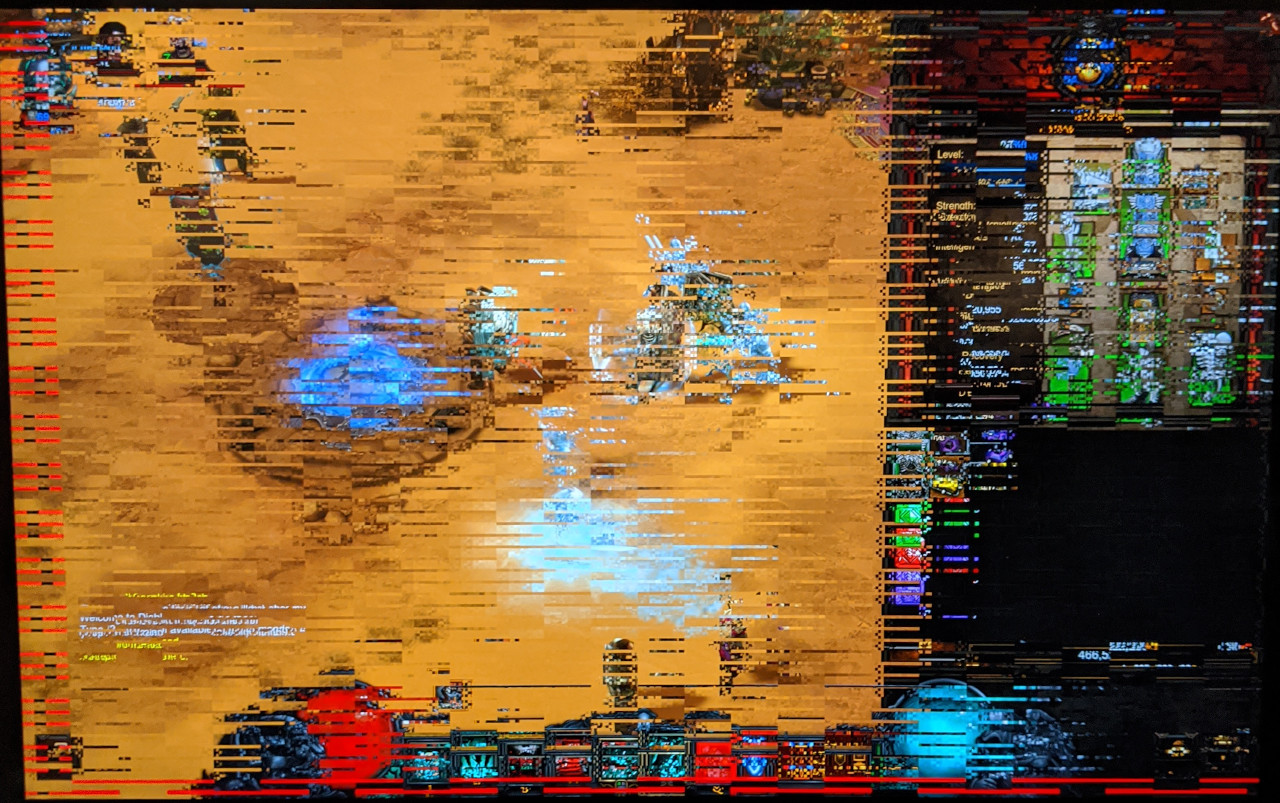 My first inclination was that she ended up installing something sketchy that possibly caused this anomaly. Did some malware scans, nothing too out of sorts there.

Ended up running Apple’s hardware diagnostics, as my next thought was that the motherboard and/or graphics card was on the fritz. Nothing reported back there.

After some digging, which was a pain in the ass since I wasn’t entirely sure how to describe what we were seeing, I found that the issue may have been related to how macOS and the MacBook Pro hardware handles switching between the integrated graphics card and the dedicated one.

Ended up tweaking a handful of different settings and had a weird mix of results that never put us consistently out of the woods.

The thing that finally got everything resolved was a combination of configuring Diablo III to run in low resolution (more on that below) and then simply changing the display option (in-game) from “Fullscreen” to “Windowed (Fullscreen)”.

To tell Diablo III to run in low resolution mode, you have to track down the application, right-click (two finger) on it, and click “Get Info”. From there, you will see an option that’s probably unchecked that says “Open in Low Resolution”.

I made sure to check that option, and closed the info dialog. I also did the same thing on the Battle.net application as I wasn’t entirely sure if they both needed this treatment or not.

The game itself doesn’t actually appear any different visually, so I’m not quite sure what the low resolution option did, outside of helping us resolve this issue.

Hopefully whatever was broken (either on Apple or Blizzard’s end, or a combination of the both of them) will be resolved in the future and if not, I wanted to get this post out there just for my own reference when I forget what the heck I did to fix it.

Worth nothing that my Dell XPS 15 laptop has a similar setup with an integrated graphics card and a dedicated one and I haven’t run into any issues like this. Never thought I’d say this, but “Go Windows”?